The first round of the testing process was carried out with two groups and took place at two residential institutions. An area of the city of Pécs (located in Southern Hungary) is one of the locales where you can find a relatively high proportion of unemployed people and a Roma minority. Although this appeared to be an appropriate locale, it was rather difficult to find voluntary participants for the programme. Eight young people, aged 21-25 eventually joined the training and participated in the activities with a rather high level of motivation. Half of them – three boys and five girls – had a secondary leaving certificate while the others had a certificate of skilled labour. During the time of the training none of them had any permanent employment. Foundation MIOK, an organization working for people at a disadvantage and specializing in employment training in the region cooperated with the project.

In line with the Pécs programme we have managed to establish a test group in EMMI, a Budapest reformatory with 12 young people with most of them coming from poor and socially marginal families. They had not been well educated or employed before entering the reformatory. We did not originally plan to train such a group but later we have found it interesting to see how the components of the programme would work in such a medium and what sort of modifications it would need to work smoothly.

The members of this target group have a common feature: the level of their knowledge is rather low and many have not finished primary school. Their vocabulary is rather poor, they use simple sentences to express themselves and often do not understand questions. They are often characterized by difficulties of following norms. They are not willing to accept adults and do not respect authority. The level of their self-recognition is rather low and needs improvement. Their achievement is rarely redeemed by positive feedback but being praised might be a significant source of motivation for them.

They often fail to regulate their emotions and passions. Tension accumulated in them often leads to aggression. Their behaviour is basically determined by the position they occupy within the group. They are easily influenced by their dominant peers. As a reaction they often behave in an authoritarian way with the weak. They try to meet the institutional expectations when they realise the advantages of such behaviour and seem to behave cooperatively in situations even if they are not interested in them at all.

The activities of the Budapest group were managed by the members of the National Transit Employment Association (Országos Tranzitfoglalkoztatási Egyesület) who have been cooperating with the Budapest reformatory for a long time. This organization coordinates the civic groups supporting the disadvantageous target groups within the labour market. As a consequence the association closely cooperates with experts who have a wide experience of these target groups.

General observation concerning the RLG practice of the two test groups shows that the participants enjoyed the activities but they could not concentrate on their tasks for a long time. The most successful activities involved playing, manual activities, dancing, music and lasted for about half an hour. The young people favoured to a lesser degree those activities which reminded them of school exercises, contained mathematical tasks or an absorbing task. They were mostly interested in fashion, family issues and deviant behaviour.

Trainers with wide experience stated what would be their expectations concerning the new trainers. They said it would be useful for the new trainers to observe or collect experience of how to deal with the target groups. They were of the opinion that it would be good if the trainers could be chosen from among the helpers of the young people. They have also proposed to start team working and jointly managing the programmes. 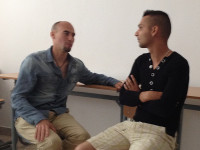 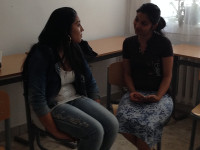 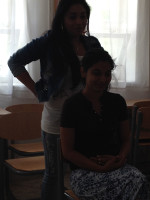 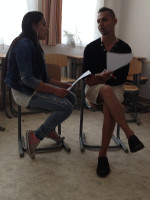